This week I participated in my first J.P. Morgan Chase Corporate Challenge. My company was offering to partially subsidize anyone who ran for their race fees. I registered and then promptly forgot I did. The race date grew nearer and it dawned on me that oh yeah, I signed up for this. I wasn't paying attention at registration because I also realized that it was 2 days before a marathon I had signed up for. I figured I'd just turn it into a shake out run.

As race day grew nearer I looked at those who registered at my company for familiar names and didn't find very many. It looked like I might be in for a lonely night, or trying to make new friends from other departments. I also spied on last year's results and noticed something with the times... they were very achievable for my abilities. The top runner from my company ran the same pace as my 5K PR pace I ran just last month. My half marathon pace would also place me in the top 10 for my company. I was now debating whether to go for broke and try to get top honors for my company and bragging rights at the office.

Race day came and I worked from home so I could get downtown fairly easily. I got to Grant Park and found my company's tent. Good thing I had my head on a swivel because I saw our flags in a spot that wasn't where we were told we were going to be. I walk over and there's no formal check in or anything so I grab some water and a seat and wait for familiar faces. Eventually a former colleague who had transferred departments showed up and we chatted and I met others who I had only know by name and through email. We took team pictures, warmed up, and off to the start corrals we went.

The start was extremely crowded. I found out later that there were somewhere around 25K runners and walkers compared to 10K finishers last year. I found a gap in the gates and squeezed myself into corral A since I learned from others of how awful the start can be since no one lines up where they are supposed to. After the national anthem and some words and thanks, including some from my company's CEO, we were off and running. Sort of. It was very crowded and sure enough there were walkers clogging up things up front. I spent the first half mile moving in spurts through gaps when they opened up.

As the race progressed I quickly realized I was unable to find a steady rhythm with all the dodging and weaving I was doing. So I just settled in and rode it out moving through openings when I could get them and just conserving strength for the marathon. I passed several coworkers along the way and yelled words of encouragement. Heading down the home stretch I saw that people still hadn't even started the race yet. I crossed the finish and had to detour way around the corrals to get back to my company's tent. I was the 2nd person back to the tent which was encouraging. I had finished the 3.5 mile race in 24:28 for a 6:59 pace and wound up finishing 5th of 113 out of my coworkers. Our lead runners were faster than last year so I would of been hard pressed to catch them. After post race snacks and chatting with coworkers I went over and caught up with Maggie who's tent was 2 down from mine. I finally decided to head home since I had to be up for a road trip the next morning.

All in all it was a successful night in that I ran relatively well and at the effort I had wanted to without jeopardizing my marathon. I made a few new connections with coworkers as well. I'm not sure if I'd do the race again though just because the crowds were a bit much.
Posted by Unknown at 10:43 PM 1 comment:

Some of you are already aware of this, but now it's blog official. I am moving. Not only that, but I decide to take the next step in adulthood and am buying my first condo. I've been renting in Chicago for the last 8.5 years including 5 years in my current apartment so this will all be a big change. In addition I'm heading to a new neighborhood that I've visited many times in the past, but never lived in.

I'll be making the leap from southeast Lakeview over to Lincoln Square. I'm trading easy access to the lakefront path for the river path. I'll also be less than a mile from the River Park Track. Yet another perk is being close to Fleet Feet. I know the Lincoln Square store is smaller, but still nice to be near a running store for the fun runs and whatnot.

So I lucked out and found a great place. My realtor told me that the housing market this spring was crazy and boy was she right. After only a week of searching I found a place I loved and wound up in a multiple bidder situation. My bid was chosen and soon I'll be closing on it. I've be upgrading from 1 to 2 bedrooms and will also get an extra 400 square feet for my current place in addition to a storage unit and a private patio. It'll be nice when I'm finally settled in this summer to have some cookouts.

This week's adventure would be my first serious attempt at a half marathon since last September's Chicago Half. For those who don't remember I set a monster PR at that race which served as a testament to how much work I put into training last summer. I've kept pouring on the mileage and expected even more gains this time around. Heck, I even ran the first half of a marathon faster than Chicago's time. We'll just ignore the 2nd half implosion that occurred after. All signs from other races indicated that a sub 1:35 wasn't out of reach. I appear to be cursed though since things didn't go quite to plan.

The nice thing about the Wisconsin Marathon and Half Marathon is that they do a local Chicago packet pick up. It was at Fleet Feet the prior Sunday and I headed down their after my post-Ravenswood shenanigans. I raced down there with about 5 minutes to spare and only a little tipsy. The shirt was kind of a blah white, but whatever. Fast forward to Friday and I start experiencing the first signs of trouble.  I spent the morning running to the bathroom every 15 minutes. Not good at all. I made it through the rest of the day and was able to eat ok. I was up bright and early on Saturday for the drive up to Kenosha. All was pretty uneventful and I arrived in time to see the sun nice and low over the lakefront. 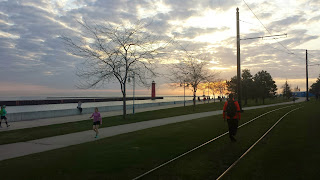 Waiting for the race to begin I used the facilities and walked around a bit. I spotted one of the Redditors and went and sat next to him. From there I spotted Kelly and gave her a wave. There were mosquitoes everywhere and it was starting to get annoying. I could also feel myself already getting warm and the air was thick with humidity. This was sounding less fun. Soon I decided to hit the restroom one last time before heading to the start corral. All seemed fine and after some announcements and the national anthem we were off.

The start of the race was quite crowded and I had some trouble finding room to run. At about the half mile mark I finally found more room and did some mental calculations and figure out I was behind pace for how I wanted to start so I sped up. I never display my pace while running, instead relying on mental calculations which gives my brain a distraction while running. Well my calculation was off and I also sped up a bit too much and hit mile 1 in 7:15. According to my Garmin stats later on I had sped up to 5k speed. Oops. The next couple miles were also low 7s.

Around mile 5 I was starting to feel both the warmth and humidity as well a developing stomach cramp. I guess the issues from the day before weren't done yet. I kept soldiering on, but slowed my pace to mid 7s. I took a little longer at a couple of the aid stations to make sure I stayed well hydrated. Some of the roads that we ran on were quite rough and full of potholes so it turned into a game of be careful where you step. The course is relatively flat, but there are just enough gentle hills to keep you on your toes.

Getting towards the late miles I was definitely in discomfort. I was still holding around a 7:45ish pace and knew I was still on track for a PR, but no where near my goal. I finally decided that I had enough and stopped and used the restroom just past mile 12. I know I was just a mile away, but I figured the relief would allow me to pick up speed to account for the time lost. This was my slowest mile of the day at 8:13, but not all that bad given the restroom stop. I pushed myself and crossed the finish line in 1:38:22. This was a 2.5 minute PR over September's time. 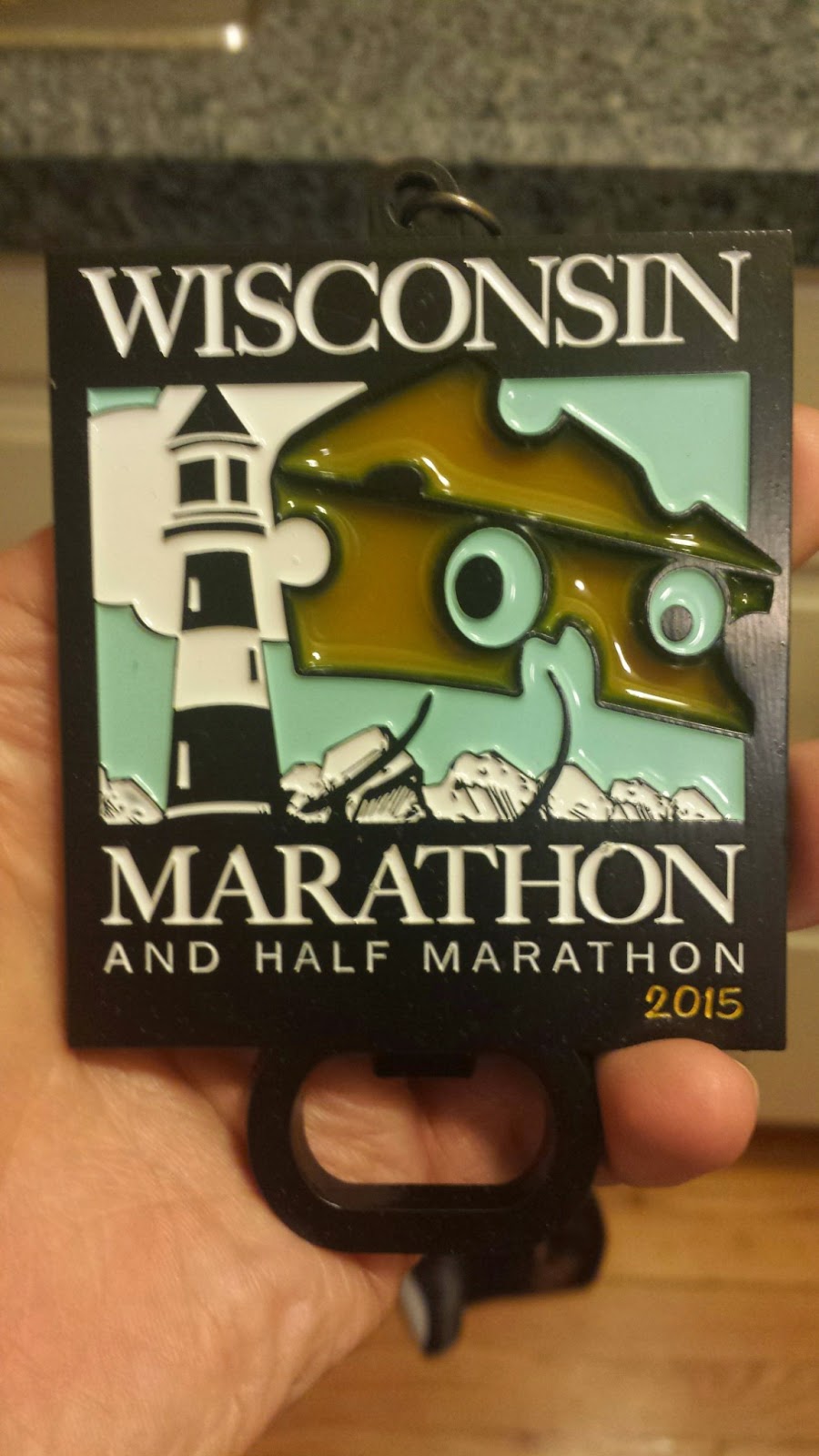 Post race I grabbed some gatorade, water, and a chocolate milk and then headed over to where Lynton an Kiku were spectating and cheered on the runners for a bit. He was watching for a friend who was trying to BQ in the marathon. We figured we had some time and headed to grab a beer and brat. We once again headed out to spectate and his friend destroyed her PR and crossed 12 minutes under her BQ qualifying time. More beers followed and everyone had a good time.  Wisconsin is a fun race and well run. The weather and spotty roads made it a little difficult this year. The tummy troubles didn't help either. Oh well, it just means I'll have to PR again in my next half.