I've been laying low for the most part since completing Route 66 back in November. It took me quite awhile to get back to feeling normal after beating my legs to pulp with all those races and then getting sick. The original idea for F3 was to be a benchmark and tune up for running the Phoenix Marathon in February. Well things didn't go all according to plan.

F3 had a later than normal start compared to most races with it kicking off at 10AM just outside of Soldier Field. I left with plenty of time to get down to the start and was supposed to meet people to get pictures beforehand. Fate had different plans for me. First the Brown Line train kept experiencing delays and kept getting held. Finally after several stops they announced that the train would likely be turning around at Merchandise Mart since the bridges into the loop were raised. Everyone groaned and I dashed off the train in search of other means. Luckily we were stopped on Chicago so I hoofed it the 5 blocks over to the Red Line and took that down to Roosevelt. Once there I didn't see any sign of a 146 bus so I started high tailing it over to Soldier Field along with some other runners. Once at the stadium there was a lack of signage on where we needed to go. The volunteers getting ready on the course didn't even seem sure. Finally after several dead ends I found the United Club and made it in just as everyone was starting to come out to get into the corrals.

I'm already sweating and my heart is racing from my pre-race dash. I fought through the crowds and finally got to gear check. Luckily I was mostly prepped so I just threw things in my bag and headed back into the stream of people. I also lucked out that one of the bathrooms was devoid of lines so I was able to hit that real quick on the way as well. There were a couple thousand people trying to get through one set of double doors so it took quite awhile to get outside and into the corrals. I made it with just enough time to acquire GPS signal and re-tie my shoes. After the national anthem we were sent off in waves 2 minutes apart. I was in the 2nd wave.

As my wave bolted out of the gate I managed to keep up with the lead runners. I think the adrenaline from rushing to get to the race had me going. I had no idea what pace I was running since I had my watch set to track my HR, which was higher than expected at the time and I hoped it was a glitch. It wasn't. First mile was completed in 6:59 and the second mile in 7:00.

After the first couple miles I slowed myself a bit to keep from completely crashing. I knew if I had kept the early pace up I would of had a meltdown before the race was over. I probably used up a little too much of my fuel hurrying to the start and was paying for it. Also going against me was the holiday weight gain which I still haven't dropped yet and the fact that I bruised my quadriceps a few days before the race and was still tender. Imagine my surprise when I saw Pete heading the other way when I was nearly to turnaround. I'd never been that close to him in a race before, but he sped up and I slowed down.

The 2nd half of the race was tough. My legs were being less and less agreeable. I had to slow my pace to keep the heart rate under control. I was in no man's land a lot of it which is tough. I couldn't try and reel other runners in. By the time I finished the 12th mile I had run my slowest split of 8:19, but saw that a sub 1:40 time was still in reach if I ran the last 1.1 miles in 8:30. I dug in and held on for dear life. At the 13 mile mark I saw that I still had about 45 seconds left and yet the finish seemed so far away still. I put everything I had into the finish.

Crossing the finish line I spotted Pete who managed to get a picture of me. I stopped my watch a little late at 1:40:02 so I knew it was close. I got my medal, chugged a gatorade, and grabbed a water bottle and headed over to where Pete was. I knew from after the turnaround that Charlyn and Mo were about a half mile or so behind me. It wasn't long before we cheered both on as they crossed. We took a couple pictures and then headed back inside to warm up.

Once inside I picked up my stuff from gear check and talked to some other runners I knew. Mo and I were going to head to Reggie's for the after party. There were shuttles which made it convenient. We stopped at the table that had results available and I found out that I just hit my made up in race goal with a time of 1:39:59. I had thought that was my 3rd best time, but it's actually my 2nd fastest half marathon. I do have a few half splits from marathons that were faster, but those don't quite count. Once at Reggie's we enjoyed some Goose Island and a bunch of kids playing Nirvana and Foo Fighters tunes. 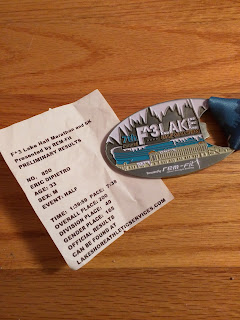