This year was my first running the Ravenswood neighborhood 5K.  I did want to run the race last year, but it fell on the same day as the Good For Life 5K, another fine race that I was already registered for.  I had heard nothing but good things so I made sure to sign up this year when I learned there would be no conflicts.

When I had first registered I had hoped to make this a goal race.  I haven't made an attempt at a 5K PR since setting my current best at Race to Wrigley last year.  That 22:00 is teasing me saying that with just a little more effort I can get below 22.  Getting closer to race day I realized that there was no way a best was going to happen.  My running consistency has fallen apart due to various little ailments and illness.  With a fast race no longer in the plans I decided to enjoy the beautiful weather this past Friday and went for my longest run since February.  I logged 8 miles which is 2.5 miles longer than anything since the 14 miler I did on February 16th.  I also wanted to get something in before I tackle the Wisconsin Half Marathon this coming weekend.  The Ravenswood 5K turned into a tempo run on not fully recovered legs.

On Saturday I did my packet picket at the new Fleet Feet in the Roosevelt Collection.  I was already down in that area taking care of UPS laziness in not wanting to actually delivery a package even though that's kind of what they're supposed to do.  I've been the Roosevelt Collection a few times before to see movies at the Icon, but this was my first time in the store.  The pick up was quick and so was browsing the store.  It was on the smaller side.  They did have some boxes of clearance gear I couldn't help browsing through.  There was a nice wind jacket I could of probably used, but decided to not spend the money.

So for the first time in my history I went to bed at a semi decent hour for a morning race.  It was lights out at 11PM instead of my usual post midnight.  I felt pretty refreshed when I awoke on Sunday morning. I still wasn't looking forward to the cold, windy, and potentially rainy race conditions though.  Me and Jennifer coordinated buses and headed up Clark.  I should say the bus driver flew up Clark.  Can bus drivers get speeding tickets?  We were there just before 7AM and people were still setting up.  We walked around and I used the restroom.  Eventually the time came to drop stuff off at gear check and get to the starting corral.  Not long after we were on our way.

Mile 0-1 featured several speed bumps in the first half mile.  They were well marked as well as having course marshals letting us know they were there.  I focused on form and making sure I wasn't overdoing things.  I can't remember if it was during the first mile, or the 2nd but I heard some guy tell his kid "hey there's the mayor!".  I looked up and sure enough there was Rahm Emmanuel out cheering on the runners and giving high fives all by his lonesome on the side of the course.  One of the running buddies, Lynton, would later keep him company and get a picture together.  My pace was 7:29 which was right about on target for what I was trying to accomplish.

Mile 1-2 is where things started to get tough.  I held up pretty well until the 1.5 mile mark like I did at Good for Life, but this time it wasn't fatigue that got to me, it was the fact that my ankle was starting to burn.  I think the fact that the streets not being level was causing a little bit of excess motion on my ankle and it wasn't ready for it since I've done most my miles on the much more forgiving treadmill this year.  I told myself it was a short race and I'd be done soon.  I did let myself slow down and just shadow people as we turned up Lincoln.  My pace reflects this as it was a 7:41.

Mile 2-3 is where things got tough.  There was a nearly half mile stretch of running into headwinds down Lawrence.  I put my head down and tried to truck through it the best I could.  I was doing somewhere around an 8 min pace at this point and knew going any faster was going to be tough.  I was going to conserve my energy for the turn down Damen.  With a half mile to go I picked up my pace and was now doing around 7:20 without the wind in my face.  My pace for the mile was 7:47.

Mile 3-3.1  The homestretch is where I really tried to pick up some steam.  We were going into the headwind again which made it tough.  I spotted Pete who shouted out some encouragement to me and I was able to get the legs churning for a strong finish.  6:47 Pace

My time was 23:45 which was only 3 seconds slower than I ran Good For Life a few weeks back.  It was definitely right around where I wanted to be given the less than fresh legs and the wind.  Once I finally start doing some speedwork I think that 22 might fall later this year.

After going through the finisher's chute I headed down to get my bag then went back to find Pete.  He was MIA at that point so I walked back and forth looking for familiar faces.  I finally found Pete with Anne and Bob in the middle of the race site.  Pete went off with his dad and I let Anne know that there were Ann Sather cinnamon rolls to be had.  We went and got some and spotted Jennifer and Mo coming back from gear check along with Lynton 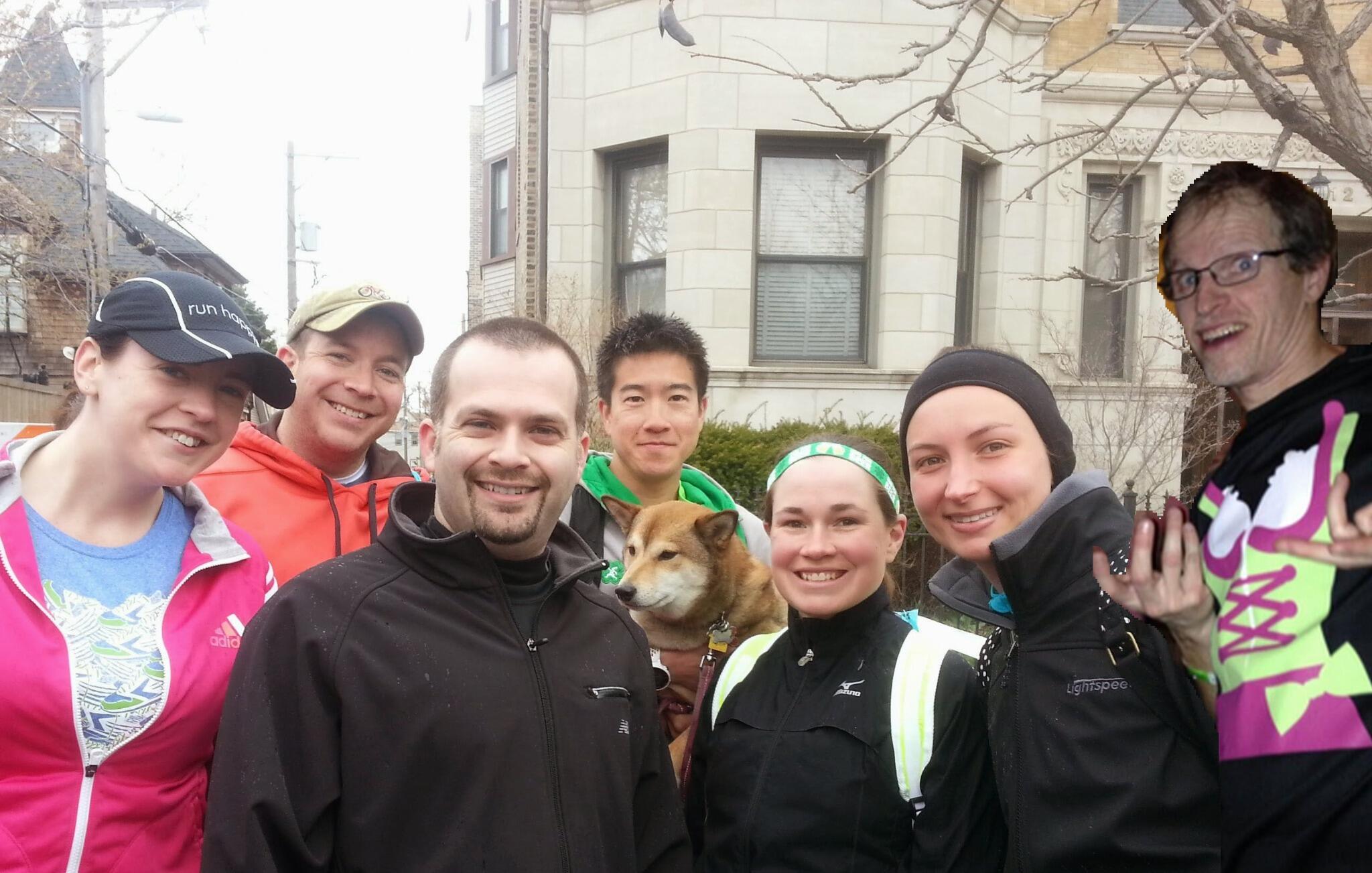 It started to sprinkle a bit so we decided to get brunch.  There was beer involved.  It was fantastic.

Last year I ran The Race That's Good For Life 5K on a whim.  It was a well organized little race that was a little different that the others and I enjoyed myself.  This year they decided to re-brand themselves with a title that is a bit less of a mouthful - Good For Life 5K.  It is a community based race that takes place in a neighborhood in Oak Park.  It also appears to be a family affair as with added kids events the whole family comes out to run. 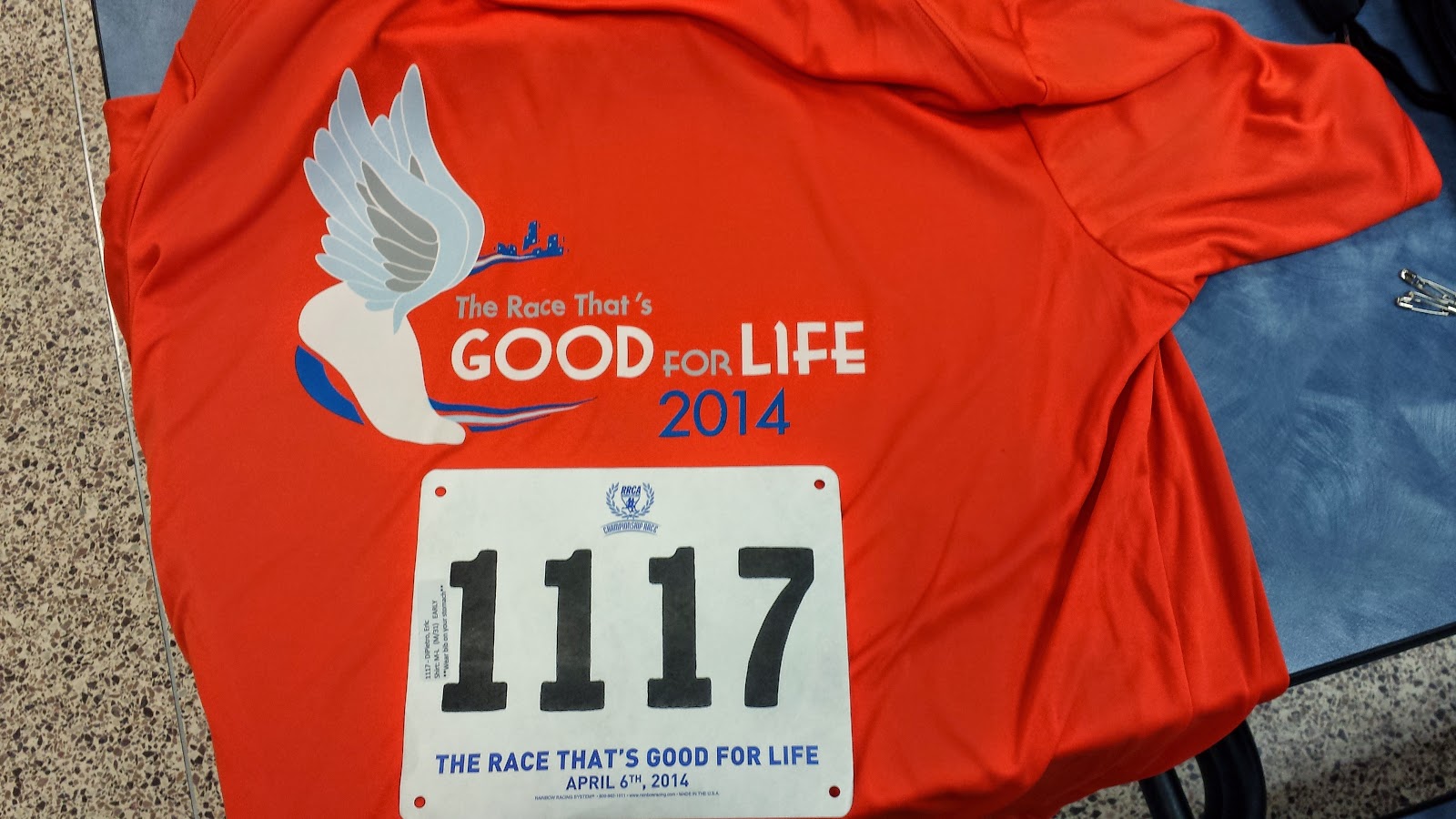 I registered for the race early on.  I took advantage of the early registration rate which made this race a bargain.  I knew the early April date meant that weather should still be cool and the course itself is great for those gunning for a PR.  Last year I didn't know what to expect and came away from the race with an unexpected PR.  When I signed up I had visions of another PR, but got sidetracked along the way.  Instead I decided to use the race as sort of a barometer or benchmark to see what kind of fitness level I'm at.  I haven't done much of any speedwork yet this year and came off a rough March where I spent the first 9 days resting an injury before easing into mileage and then getting sick and losing another week of running.  I still pulled off a decent Shuffle last weekend so I knew I could handle the 5K... just a matter of seeing how much work I needed to be in true race shape.

Come race morning I got up and got ready.  I took the Clark bus to the Green Line and from there out to Oak Park.  Base camp was set up inside the local high school which meant I was able to get out of the slight chill of the early morning.  I easily picked up my packet and headed to the cafeteria to relax since I was a bit early.  They already had refreshments set up for those who wanted them.  Around 9AM I decided to finish preparing and drop off my bag at gear check.  I ran into fellow running friend Lynton outside who introduced me to one of his friends.  They hadn't run the race before so I gave them a little heads up on what the course was like.  They had already heard about the deep field of runners.  After a little bit of a warm up and some light active stretching I headed to the start corral.

The way this race is set up is that the men and women run in their own heats.  The women started their race at 9:10 and the guys kicked off at 9:50.  The women also got flowers as they cross the finish.  Well anyways I picked a spot in the middle since I knew what kind of group was running this race and I didn't feel like getting run over by being up front.  The gun went off and away we went.  I felt real solid early on.  My early pace was sub 7 and felt kind of easy, but I knew it wouldn't last.  I slowed off the pace a little bit and clocked mile 1 in a time of 7:11 .  Midway through the 2nd mile I started to feel the wheels come off.  My body was definitely not ready to be running hard for a 5K.  I passed the 2nd mile marker with a time of 7:37.  The 3rd mile turned into even more of a struggle.  I tried to keep up the spirits that I could still run a respectable time and that I'd just get stronger from here on out.  We were now running into a breeze and that didn't help.  I was at mile 3 in 8:00.  I did somehow manage to muster a little strength for one last kick to the finish line and the pace for that last 0.1 was at a 7:04 pace.

Heading down the long final straight away - and it is long at nearly 3/4 of a mile - I was hoping that I just might be able to repeat last year's time.  As I hit the 3 mile marker I knew it wasn't meant to be but pushed on anyways.  I finished in 23:32 which was 12 seconds behind what I ran it in last year.  The key difference is that last year I came into the race in excellent shape and ready and this year I'm still trying to build myself back up.  I'm definitely satisfied with the result.  Its still my 4th fastest  5K time... well official 5K since my split at the Shuffle last weekend was 23:28.  I'm if nothing else pretty consistent.

If you're looking for a great, affordable, and well run 5K next spring then definitely give the Good For Life 5K a look.  The course is down neighborhood streets with people cheering here and there.  There are plenty of families involved so there are people of all skill levels.  If you want to push yourself to your limits there were 121 runners who broke the 20 minute mark.  The race is easy to get to and there are indoor and outdoor bathrooms.  There are also plenty of refreshments after the race.
Posted by Unknown at 11:14 PM 3 comments: