That was all my inner monologue was saying just over 4 miles into the marathon for the Milwaukee Running Festival.

Things started easy enough.  I drove up to Milwaukee with Jennifer after work on Friday. We got to our hotel then went and found food. On Saturday we got up and I got a short jog in on the treadmill before we headed over to the Harley Davidson museum for the expo and packet pickup. It was a cold and rainy day which didn't bode well. We caught Harry along the way and made plans for getting dinner together with him and Tiffany. Once at the expo we had to fight through a bit of a crowd as it had just opened. There were peoples still around from the mile run, plus they were having trick or treating for the kids.

The expo was in a smaller building on the Harley campus. It didn't take too long to walk to the far end to get packets, even with fighting through the crowds. After getting our packets we headed over to find Mo working at the Ragnar booth and got some goodies. I also met 2 of my future teammates. Soon Chris found us and we found out we got free admission to the museum so we headed over to check that out to kill some time.

We then got lunch at Marquette and did some shopping to kill time. After a stop back at the hotel to chill out for awhile we headed out to meet up with Harry, Tiff, and Chris to grab some pizza. We ate and a NYC style place called Brick 3 which worked out since it allowed everyone to enjoy their own preferences for slices. We then moved down the street for a drink and socialize some more. We wound up in a New Orleans bar of all places and I had a Chocolate Weisse from Abita.

Race morning came early, but not as early with the clocks rolling back. We decided to walk to the start of the race since it was less than a mile away. It was still chilly out, but no longer raining. The start of the race was near Summerfest and a bit chaotic. The lines for the bathrooms were crazy long so I didn't get a chance to go before the race started since I had to stand in a long line for gear check instead. I saw my old Ragnar teammate Krista just outside the corrals and talked to her a bit before lining up to start. I had optimistically lined up with the 3:30 pacers knowing that I was capable of that time, but didn't realize how far along my body was in recover from the 50 miler 2 weeks prior.

Once we were off and running I felt comfortable keeping with the pace group. Things ticked off pretty smoothly and I saw restrooms just past mile 2 and so I used them to much relief. Once I got done I may have unwisely picked up the pace a bit to re-gain some ground that I lost. It felt ok, and then past mile 3 we hit the first big hill of the race. I trucked up it, but it started to get to me near the top. My quads were crying out in pain and I already knew I was going to be in trouble for the rest of the race. From here on I slow my pace just hoping to survive.

The miles ticked off fairly steadily and I just tried to hold things together. The course definitely rolled which didn't help. We finally reached the split for the full and the half and I contemplated cutting things short, but couldn't bring myself to do that and so trucked on. After the split we had another long hill that I somehow managed to run all the way up. This would pretty much be the last hill that I ran up. The rest I had to walk.

As the race went on my pace just slowed and slowed. I had to walk more and more as my legs had nothing in them. I was completely spent. I finally spotted Krista and Mo while on one of the out and backs and knew they weren't too far behind. Krista passed me just before mile 20 and Mo caught up just after. We were at the 3 hour mark so I told Mo she only needed to run a 10k in less than an hour and she had this. That last 10K took me an hour and 14 minutes.

I really struggled to get the last few miles done. I could barely get the legs moving. I was at a point where my quads were so wrecked that even the downhills hurt. I grit my teeth and kept moving. I tried smiling for the cameras as I went past, but it was hard to hide the pain. I somehow turned a waddle into a jog for the homestretch and finished in my 2nd worst time of 11 marathons. I am human after all. There was quite the spread of treats in the finishing chute including water, chocolate milk, bananas, pretzels, granola bars, and even chocolate chip cookies. A lady tried to give me one, but I already had my hands completely full. That made me sad.

I was lucky enough to catch a pedicab back to the hotel and showered before checking out. The next mission was to get ribs. I was hungry and deserved it. 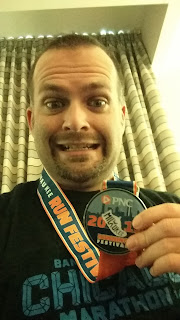