This year was my 2nd year participating in the Ravenswood 5K. It's a relatively fast course in the Ravenswood neighborhood of the city and includes a leg that takes you through the heart of Lincoln Square. I enjoy the race since it is early enough in the season where it's usually not too warm yet and plus it takes place on city streets so there are less crowding issues than faced on the lakefront path. The downsides are the race features a few more turns than optimal and sections of the course include speed bumps.

Heading into race day I felt a bit less than optimal physically. I didn't sleep well during the week and loud neighbors didn't help. I can't wait to move out of here and get some peace. My weight actually dropped as low as it's been and I even felt a bit shaky on Saturday. After eating a little more than normal and resting up most of Saturday I did feel better, but not at the top of my game. The 6am alarm on Sunday still felt real early. 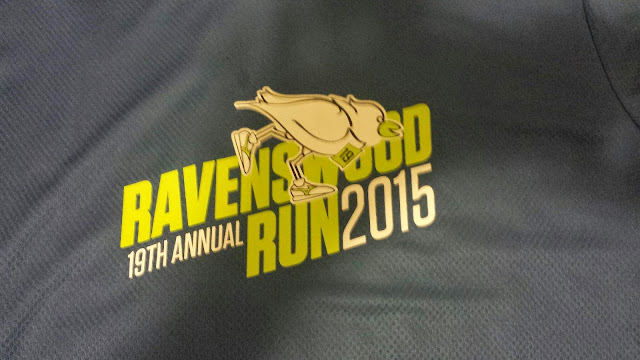 I apologize in advance for the brevity of this recap. I've been extremely busy lately and may get much more busy. More on that to come later.

This was my 3rd year running this 5K. I enjoy it because it offers something different than the typical 5K course along the Chicago lakefront path. It also features relatively low registration costs and stiff competition to push you to run your best. Uniquely the race splits the field into a women and men's race with starts timed 40 minutes apart.You could theoretically run and also see your significant other start and finish.

After a rough night of little sleep I headed down to Oak Park early. I saw Annabelle and introduced myself since we never formally met before. I knew her through reputation as well as friends in common. I then headed inside the high school to pick up my packet. I found some steps to sit on and get myself organized when Zoe sat in front of me. She totally missed that I was there so I leaned down and asked if she was ready. Totally caught her off guard and then she was like did I just sit in front of you without realizing? After chatting for a bit we both parted ways to prepare. I dropped off my bag at gear check and headed outside where I spotted Lynton. We watched the women's race start. I spotted Erica, but she was on the other side of the crowd. After the women headed off we took off down the course in reverse to warm up and cheer on our friends.

We looped around and camped a little over half mile from the finish. We clapped and cheered as the lead runners came through. Eventually we saw most of our friends run by so we finished our warm up. The water table was empty so I headed back into the school to find a drinking fountain. Heading out to the start I spotted Jessie and spoke with her a bit. I also spotted Erin running around in an official capacity. I realized I needed to get moving and excused myself and nestled myself into the starting crowd.

The race started and we were off. I tried to keep it relatively comfortable to start things off, but soon started passing people. I still felt alright and hit the mile marker at 6:27. The 2nd mile is when things started to feel tough. I hadn't pushed myself in a 5K since October so my legs had to get re-acquainted. After a couple turns we went uphill into a bit of wind and the burn really started. Mile 2 was a little slower at 6:39. The 3rd mile had us turn into our final stretch which was a slight downhill, but right into the brunt of the wind which was unkind on this day. Legs were still burning and my heart rate was redlining. I couldn't go any faster on this day. Mile 3 was 6:42. I held on the best I could for the final stretch and ran the final 0.1 with a 6:36 pace. My final time was 20:29 which was slower than my target goal, but represents a 36 second PR which is still a win in my book. Once I get my legs back from the beating I gave them with my  Marathon/8k combo I feel like I'll have no problem getting under 20. It would also help if I had a week of better sleep and no electrolyte imbalance. I'm going to be ready to rock things at Ravenswood coming up next week. 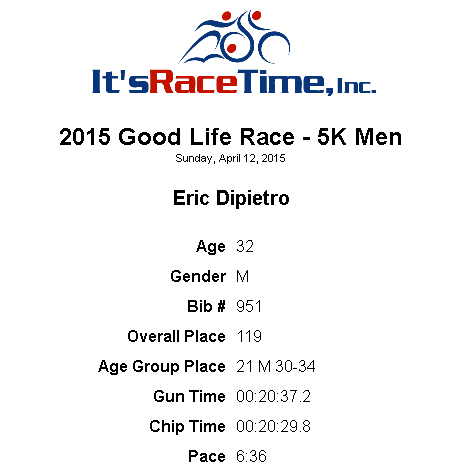