I entered 2016 with high hopes. My 2015 was pure awesomeness. I thrived at running and set PRs at basically every distance while pushing the limits of what my body could do. I also managed to buy a condo and run my first 50 miler. I may have over extended myself and could never get going in 2016.

I tried to use the same winter maintenance running that I had done the prior year, but struggled. My resting heart rate was elevated, a sure sign of some sort of trouble that I couldn't figure out. Later on my doc would suggest using a therapy light and that I may have had issues with seasonal affective disorder. Once I ran some races, I never did feel right. My HR was completely out of control at F3. Later at the Phoenix Marathon it felt like my legs were in molasses once the course leveled out.

Spring brought some 5Ks and I even struggled here as well. I was no where near the times I was running the prior year. I don't know if I was trying too hard, or if my body was still trying to recover. I was also carrying a little extra weight after winter overindulgence. I did start to hit monthly mileage numbers that were a little higher than the previous year, but in hindsight that may not have been the smartest idea. I closed out the spring by destroying myself once again running 3 marathons in a span of 14 days with 2 of them on consecutive days.

By early summer I did find a grove. My pacing was still off a bit, but my training became consistent and I started to finally lose the winter weight. In July I headed back to run the Aspen Valley Marathon in Colorado like I had run the previous year. I'd have a nice benchmark to see if I turned a corner. The result was a time 57 seconds slower than the previous year even with much warmer temperatures. I started feeling good about myself again. That is until I struggled to get back into a training groove after the race. I hit my fall marathons and did just OK, nothing terribly exciting.

The Good
I did reach 2000 miles for the 2nd consecutive year. The was buoyed by the better mileage early in the year as well as stronger mileage to finish the year. My late summer mileage was no where near 2015's. 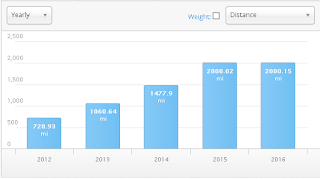 I completed 8 marathons and crossed off 6 new states in my conquest of all 50. I now have 17 states completed.

I've learned a few things about myself and now have a better plan to prepare to conquer my races in 2017. I'm already running better this winter than prior winter. My mileage isn't quite there yet, and doesn't need to be, but it's a good start. I just need to quit over-indulging on those sweets. 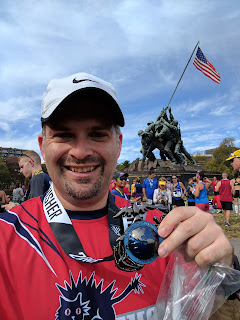 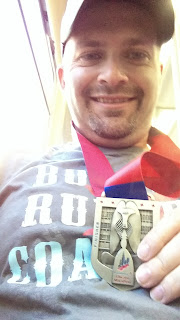 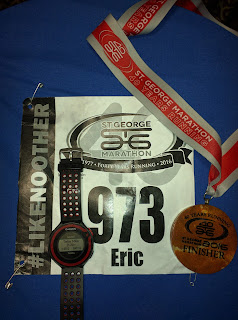 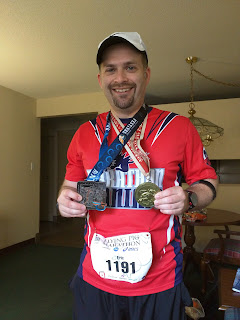 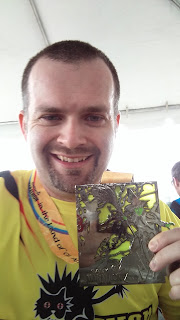