If I took a short view look back at at 2013 it would be easy to be frustrated and disappointed.  I ended the year dealing with multiple injuries and taking a full month off from any running at all.  Now that I'm into my 4th week of my comeback and starting to get stronger its becoming easier to look at the prior year in the big picture and be proud of my accomplishments.

I ran in the Chicago Marathon as my first ever marathon.

I raced in 2 new states running halfs in both Wisconsin and Las Vegas.

I also started blogging about my running adventures in 2013 and made many new friends doing so.  I inspired a few friends to start blogging as well.

I know this is just sort of an abbreviated look at things, but it shows a lot of success and improvement in only my 2nd full year of running.  I'm looking forward to even more improvement in 2014.  I've finally added a solid cross training regiment in addition to my running which can only help.  I just need to show a little more constraint in what I eat and maybe I'll finally get rid of my pouch up front.  There will definitely be new adventures and challenges.  The Wurst runners will be rocking Ragnar.  I'm also running a double trail half gauntlet in Michigan in August.  Another fall marathon is also in the works as a warm up for the Dopey Challenge that will start 2015.
Posted by Unknown at 10:03 PM 7 comments:

Back in Action - Chicago Polar Dash

I've been long overdue for a blog post but I've been busy with holiday and vacation stuff.  I also took a month off from running to let the knee heal and instead focused on leg and core workouts to help improve my form once I did start running again.   I finally returned to running while in Orlando, Florida for the week of New Years.  The place we stayed at had a nice fitness room so I actually jumped on the treadmill and took advantage of some of the other equipment while I was there.  I normally hate gyms, but this place was convenient and I was on a mission to get back on track.

I signed up for Polar Dash way back while picking up my packet for Monster Dash at the Chicago Half Marathon Expo.  Initially I wasn't going to do it, but they were giving out penguin hats and fleece jackets.  With all the half marathons that I ran last year, that distance did cross my mind, but with the race coming on my birthday weekend I figured a 10K would be long enough.  I guess it was smart I did that since they decided to change the half to a 14 miler and with all the time I took off, along with holiday weight gain, I was in no shape to complete the 14 miler - especially on just 4 aid stations carrying only water.


So fast forward to race day.  After a couple weeks in which I finally returned to running and topped a distance of only 4 miles I needed to cover 6.2.  Mother nature was not helping with tons of snow that was now melting.  I guess I should be glad I wasn't running in negative windchills, but 40 degrees with soaked feet isn't much fun either.  I wore barely enough clothes to keep warm until the race started - and started to overheat a bit during the run.  I also put on my new Mizuno Ascend trail shoes since I figured the extra traction would come in handy on the slick trail - and it did.  I also decided to have a bit of fun with things and wore a Star Wars Wampa (snow monster from the ice planet Hoth) hat.  I coordinated the bus with Jennifer and off we went to the race.  Once their I ran into Natali who also had a wampa hat and we of course had to take a picture together.

Once it was time to start the race, all the slush and mud made it very difficult to get into the corrals.  We had to go through the start line and walk back towards the right pace area.  The race officials had a lot of trouble clearing spectators off the path so we could run.  I'm guessing that a lot of people gave up on getting back to their proper pace area because I wound up having a lot of slow runners in front of me and it made the early part of the race miserable.  On top of the slow runners, the race came to a practical standstill just a quarter mile in as the sidewalk was completely flooded in shin deep water and people were trying to tiptoe up the snow banks on the side trying to stay dry.  There just wasn't room to run unless you went straight through the water and I wasn't prepared to do that just yet.  There were a couple more flooded spots in the first mile.  This wound up being by far my slowest mile of the day at 10:20.  I had planned on easing back into things, but I didn't expect to go that slow.

I soon found a groove and picked up steam.  It helped that the course became a bit more cleared up and there weren't any further traffic jams for awhile.  I wound up running behind a couple girls for most the race who were chatting away.  They stayed a pretty consistent 8:45 pace.  This pace didn't feel easy, but also wasn't overdoing it for the fitness level I'm currently at.  I noticed I was passing runners during the race... a lot of runners.  The neat thing that Team Ortho does with its results is tell you your pace between checkpoints, runners passed, etc.  I wound up passing 118 runners between when I started the race and when I finished.  There were definitely a lot of slower runners lined up front that contributed to that.  I was passed by 27 runners during the race.  For the last 0.9 miles - especially during the last half mile where I finally sped up a bit I managed to pass 13 runners and had just 1 pass me.

By the end of the race my feet were pretty much soaked so I plowed through some of the puddles I had avoided earlier. The course was now choked with slow 5K runners as well as people who finished and were using the course to leave the area.  This was a bit of a logistical mess.  I did my best to just get through it and finish the race.  My overall time of 57:08 is my slowest 10K, but not by much.  I'm happy with it considering course conditions and the fact that I'm just starting to get back into the running routine after time off.  My knee was fine during the race, but got a little sore later in the day. 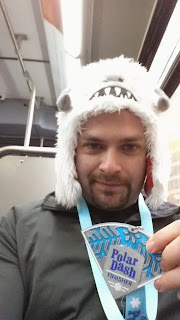 After the race I found Jennifer and we headed straight for the bus to go home.  We both wanted naps.
Posted by Unknown at 12:03 AM 3 comments: