Last Sunday I woke up and it felt like I had been rolled over by a truck.  I ached everywhere and my sinuses were throbbing.  I knew immediately that I had a sinus infection since I had previously been very prone to them.  About a year and a half ago I had gone to a specialist to get my sinuses checked out since I got very bad sinus infections around 3-4 times a year.  I got to take a fun CAT scan and all that to find that I had a slightly deviated septum, but nothing worth having surgery over.  He prescribed me 2 nasal sprays to take twice a day as well as using a neti pot, humidifier, etc.  Since then I've rarely gotten sick and when I have its been really minor.  That was until Sunday... It didn't help that the prescription on my nasal spray ran out and life didn't let me refill it yet so I'm blaming that.  A trip to the doctor on Monday for antibiotics and a refill on my nasal sprays and I hoped I would be good for the Shamrock Shuffle.

Fast forward to Sunday.  I headed to the Shuffle Expo with Jennifer.  We got our bibs and shirts rather quickly and then looked for Maggie to get the team bib.  We were running as part of the Wurst Running Club Ever.  We found Maggie down the first aisle we tried  and chatted with her for a bit.  While we were there an announcement came from the PA at the Nike/Fleet Feet stations... There was a wedding proposal in progress.  We stopped and watched the crowd gather around and a one of the Fleet Feet club runners proposed to a fellow runner.  It was cute, but doesn't seem as cool as a finish line proposal.  After talking to Maggie for awhile I realized that this had been the longest I'd been on my feet in a week and I was starting to feel it.  This wasn't a good sign.  I went home, got some pizza and passed out. 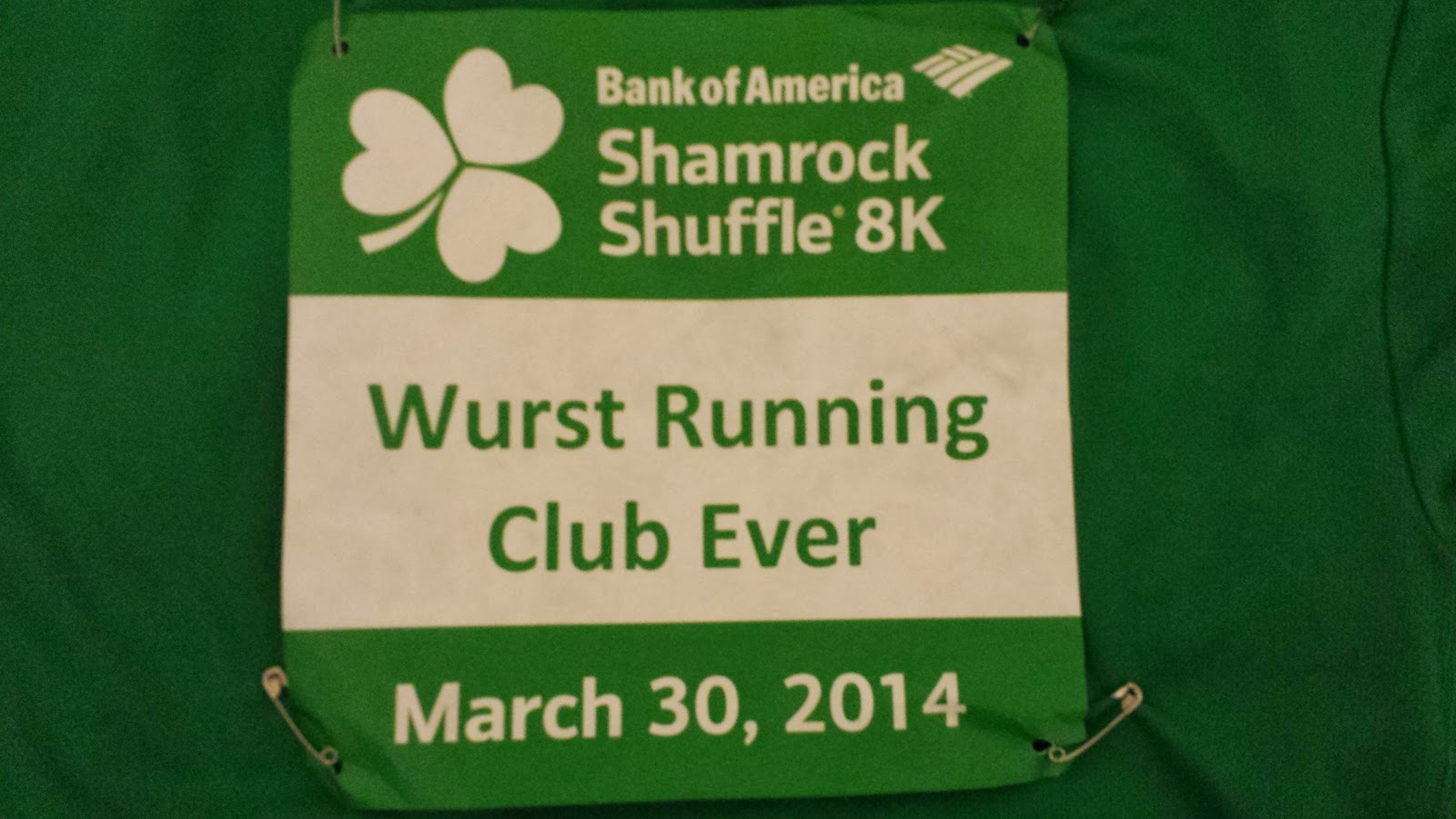 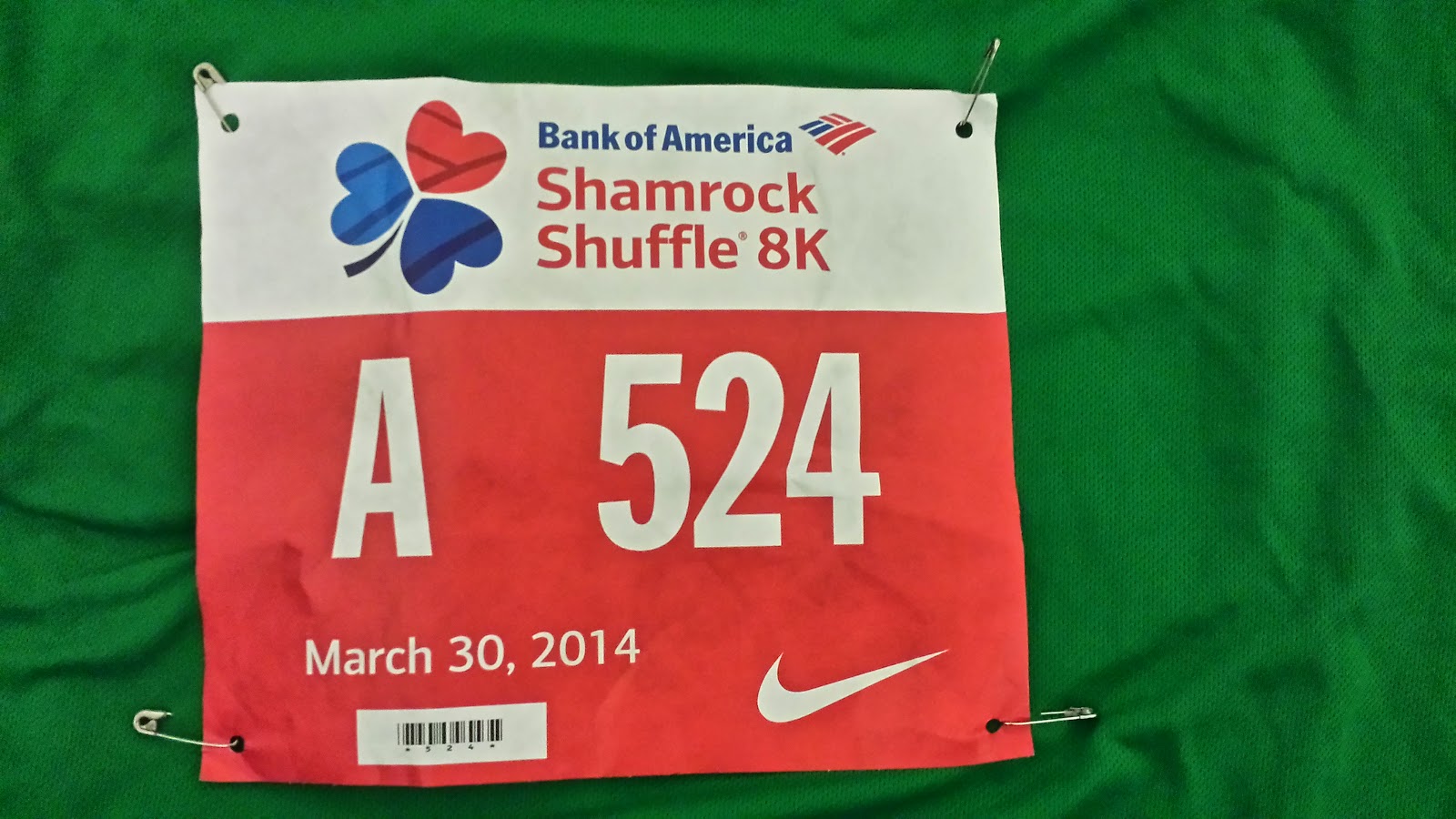 Sunday I was up bright and early.  I used a layering strategy to dress for the race.  I had a compression tank on followed by a long sleeve tech shirt and last year's race shirt.  I opted for shorts and knee high compression socks.  I wore a jacket and track pants over this that I was going to gear check at the race.  I also had gloves and a hat.  I wound up running with the gloves but not the hat.  My hands tend to stay cold unless I'm really trucking it for some reason.  As you can see from above that I was placed in the A corral.  I was excited since this was my first time in A, but also worried since I've been sick and also haven't done a lick of speed training so far this year.  I just didn't want to embarrass myself, or worse - get run over. 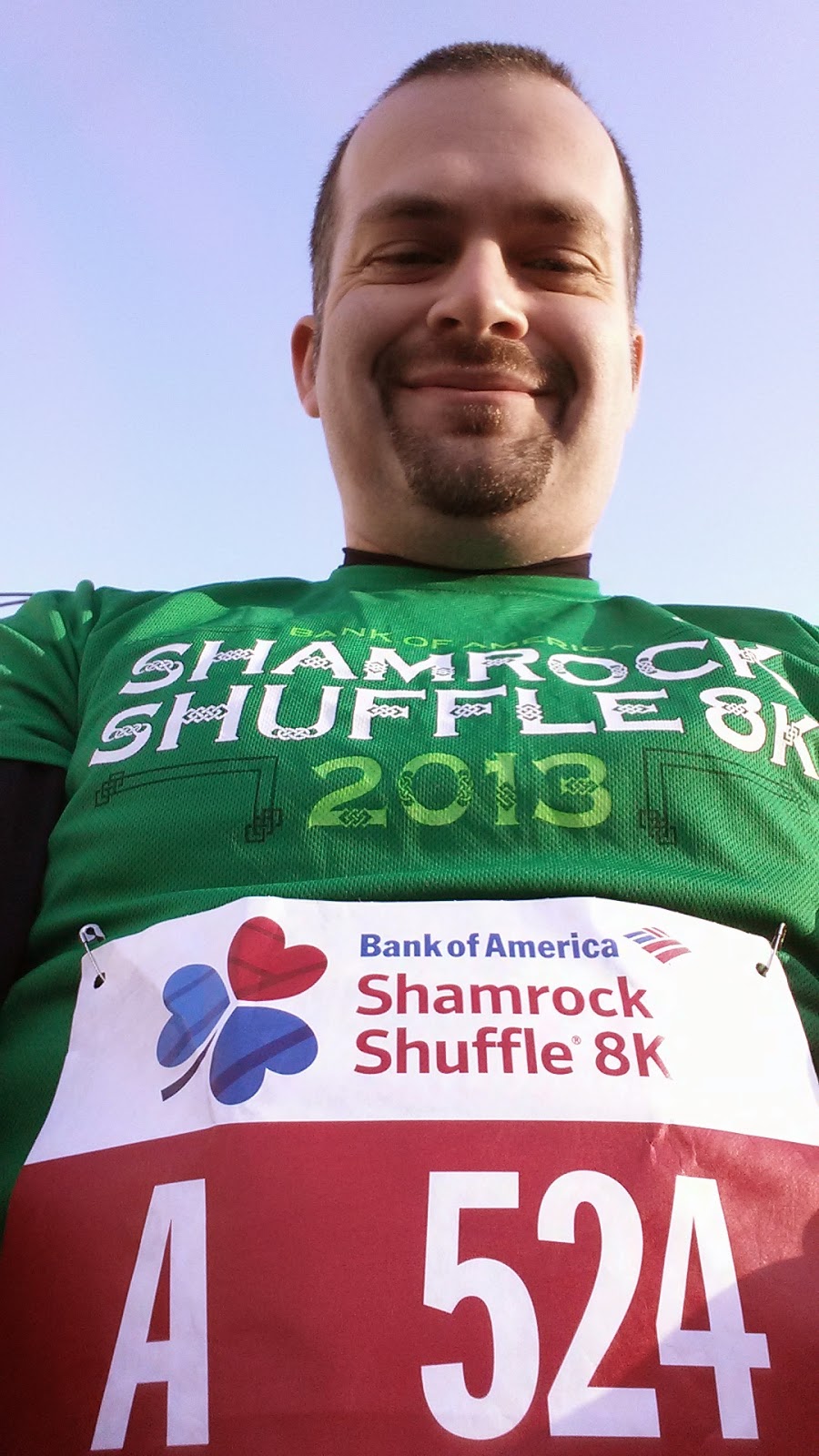 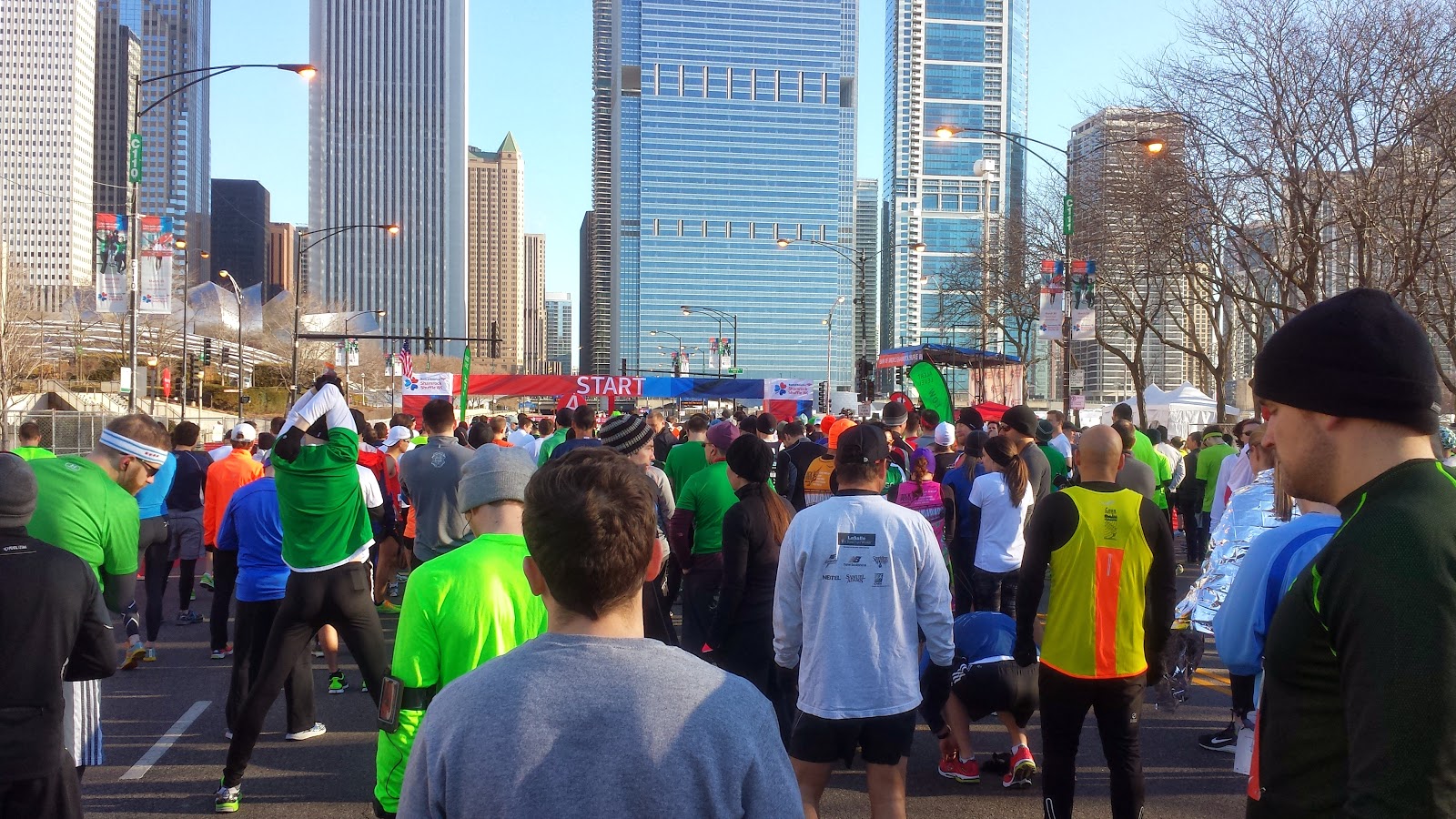 Once in the corral I ran into Chris.  He says he was hoping just to break 40 min, but I know he's way faster than that.  I let him know 40 would be nice for me too, but I just didn't want to get run over.  Before we knew it the national anthem was being sung and then the elites were off.  Just 2 short minutes later and we were on our way.  I forgot my watch so I was running by feel.  The adrenaline really carries you off the start.  I was soon on Lower Wacker listening to the beeps as people lost their GPS signals.  Soon after we cross the bridge and were north of the river.  We hit a downhill stretch and all I kept thinking was don't hit a pothole, you don't want to go tumbling down the hill at this speed.

Since I didn't have my watch and I forgot to check the gun time of when I cross I really had no idea how I was doing.  The clock at mile 1 showed just under 8:30 as I passed.  I would later find out this meant my first mile was in about 7 minutes.  I made it to mile 2 as the clock showed about 16 minutes... ok 2nd mile was around 7:30 pace.  I was at around PR level.  I wasn't expecting this and wasn't totally dying either.  I decided to keep it up and see how I would do.  The clock was still under 25 minutes when I passed the 5K marker.  I now knew I could finish the race in under 40 gun time if I didn't let up.  I struggled a bit in reaching mile 4 and knew it.  The clock time was 32 minutes.  I still knew that if I dug in that a sub 40 gun time was still possible.  When we turned down Michigan Ave I dug in and tried to pick up the pace the best I could.  I clawed my way up Mt Roosevelt trying not to lose my steam.  Once I hit the home stretch I tried to dig for a sprint and just didn't have it.  I was able to speed up a little bit and crossed the line when the clock showing 39:28.  This meant I definitely finished in under 40 minutes and wasn't too far off from a PR.  I made my way down the finisher's chute getting some water and whatnot.

As I made my way towards gear check I pulled up my race results to see how I actually did.  My time was 38:12 which was just 31 seconds behind my 8K PR and a totally unexpected performance given how I felt all week.  I was pretty elated to say the least.  I spotted Lynton and he let me know where the Bootlegger's were going to be camping with their beers.  I grabbed my gear and put my pants and jacket back on.  I started walking to get a beer and Mo spotted me.  I walked with her to get her gear and then we headed to get our prize of beer.  Mo was a real trooper after having completed a marathon yesterday. 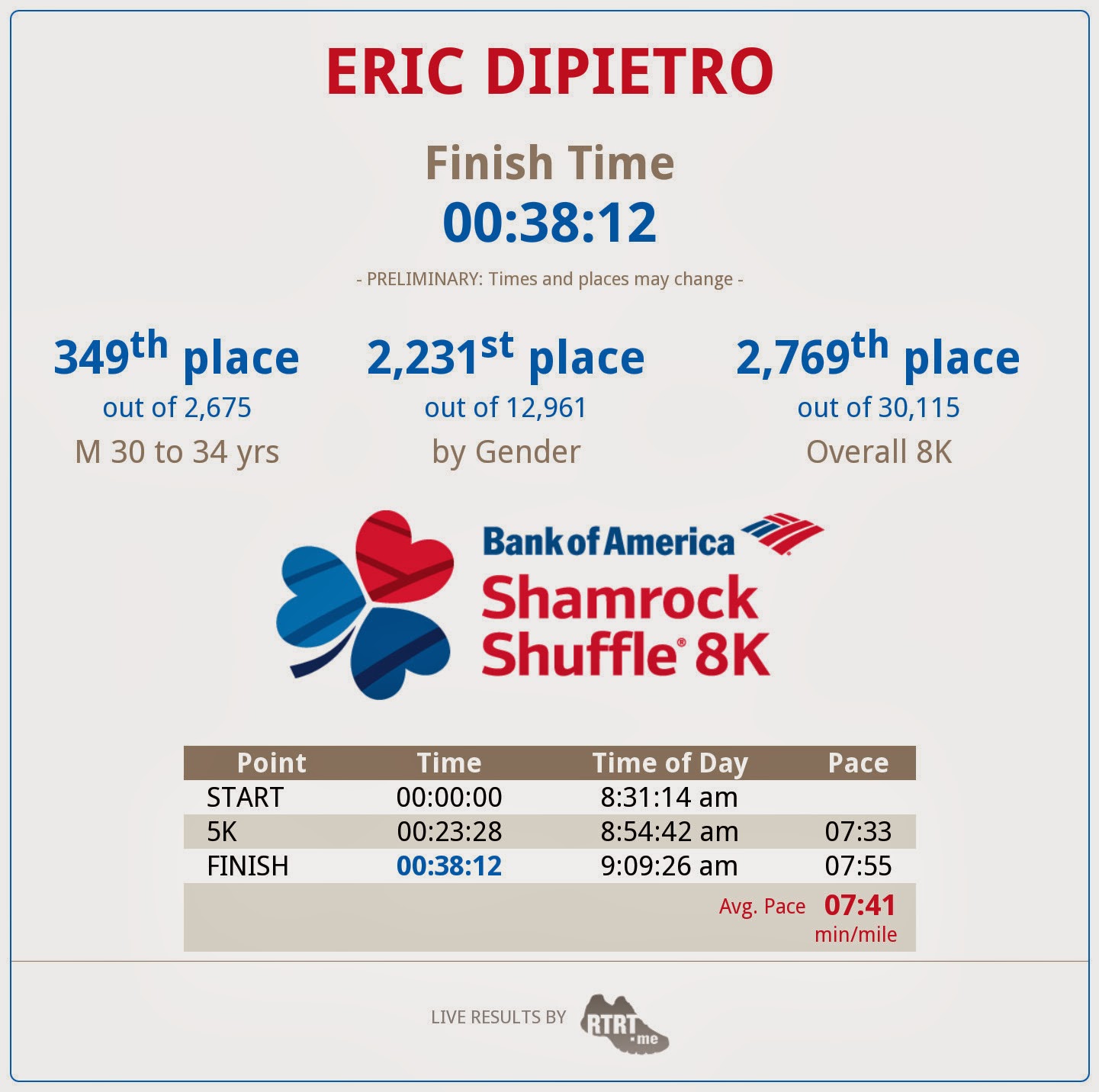 After getting our beers Mo set up her blanket and we chilled and talked to Pete while awaiting others to finish.  Eventually people showed up once they found us.  After a bit I took off with Vijay and Jennifer to go get brunch.  I needed to get done in time for the MSU game.  Needless to say after brunch I fell back asleep on the couch while watching basketball.  I'm still a little under the weather and my body was tired.
Posted by Unknown at 10:47 PM 10 comments:

The Ever Evolving Race Plans

Shortly after I finished the Chicago Marathon I had visions in my head of completing another marathon this spring.  Those who know me know that I'm determined to accomplish my goals.  Chicago was my very first marathon and I didn't quite hit the 4 hour mark goal I was aiming for.  I wanted to get right back on the horse and give it another shot.  After dealing with some aches and pains for the rest of the year I finally gave things a rest and picked up running again in January.  Things went well, but I might of did too much too soon.  After completing a run streak of 41 days I wound up taking a week off to start March.  I've eased back into running, but know that I'm too far off in training to be ready for any marathon before summer.  Let's be honest, I'm not going to do a summer marathon since the heat would definitely derail any plans of making 4 hours.

I finally signed up to do the Wisconsin Half Marathon on the same weekend I originally hoped to run a marathon.  Now there is no excuse to try and train like I'm running a marathon - not yet anyways.  This race also gives me a gauntlet of 8 races in 11 weekends.  My spring/summer schedule is looking like this:

I had always envisioned doing a fall marathon as well and that is definitely still in play.  I threw my name in the lottery for NYC.  I'd also do the lottery for Chicago and would of most likely done Grand Rapids as a back up.  Well those plans all changed as well.  My friends were going to get married the same weekend as Chicago so I with held entering the lottery for that.  I did get great news today though... 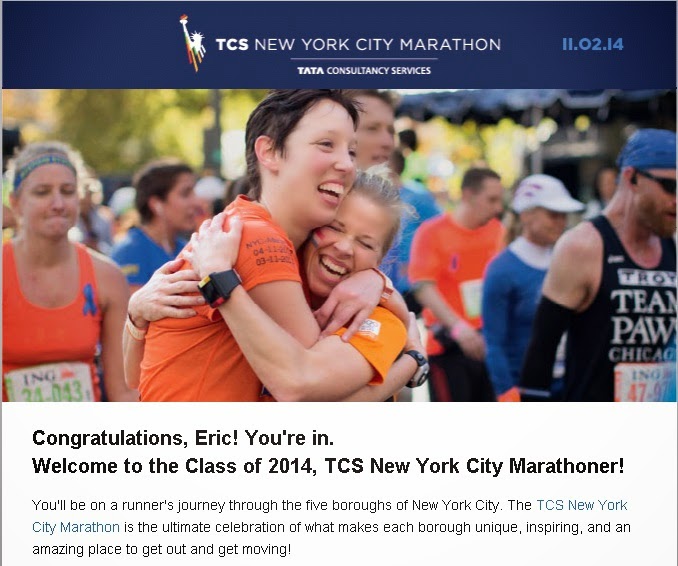 I got accepted into the NYC Marathon!  I was of of the 9,170 runners chosen out of a pool of 77,087 who entered the lottery.  I'm very excited and feeling pretty lucky.  I have to start making travel arrangements.  November is going to be a crazy month now since I'm also doing RnR Las Vegas again on November 16th.  For someone who is in only their 3rd year of running and being able to do Chicago and New York as their first 2 marathons is pretty special and pretty crazy.  Disney world will be my 3rd marathon come January.

Just  a month from now is a great Chicagoland race.  For those who like 5Ks, this one is one of the best around.  I ran in the race last year.   Its super well organized and held in Oak Park.  Its easier to get to for suburbanites and still on the green line for the city dwellers.  The race is HQ is at a local school that gets transformed into packet pickup and gear check as well as a post race area to regroup.  There are plenty of port-o-lets at the start of the race as well as room to jog around and warm up.

One of the unique features of the race is that the men and women run separately.  The guys and girls can still watch each other start and finish in spite of having different paces.  The course has more of a small town feel to it as it runs through a more suburban like setting.  There are runners of all speeds, but enough speedier folks to help push you to new limits.  I broke my PR at this race last year without that as a goal.  It served as a morale boost for when I shattered my PR later at Race to Wrigley.  Also the best part of the course - the last half mile is pretty much downhill.  Nothing like a strong and fast finish.

Use code CHICAGOSBEST2014 to get $5 off and CARA members still get an additional $3 off on top of that. 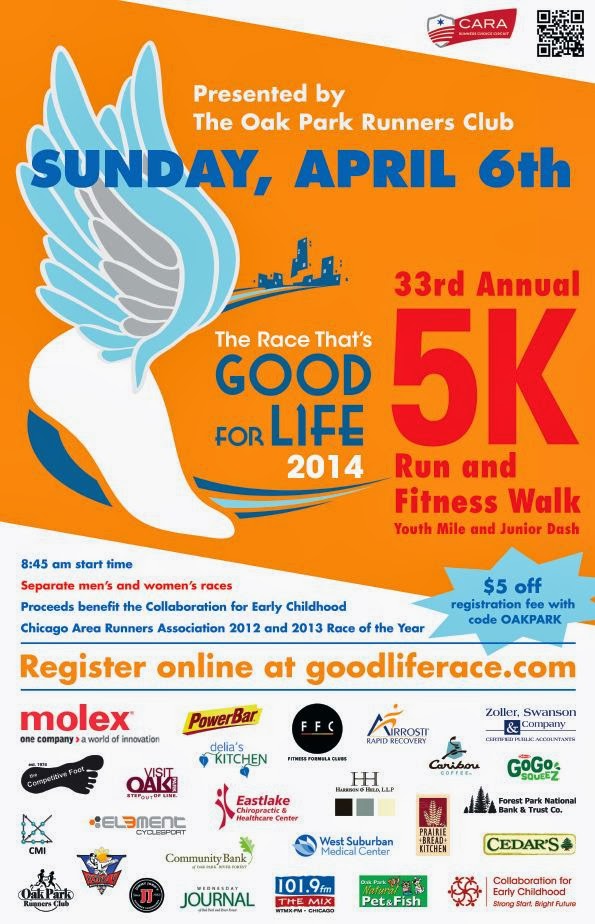